Here is a basic video for beginners at backgammon. Once you have the basic idea of what the game is about, just jump in and start playing. You will get all the little details in time. .

Nice and simple rules of Backgammon game. Do you have your own strategies to win the game?

Re: How to play backgammon

Backgammon match vs money game. There are 2 ways to score a backgammon game. One is called "money game" and the other a "match". In a money game (does not necessarily mean it is played for money but it a common style for gambling) a game is played freestyle without any preset limits to the ending score. The game is settled when either a player is doubled out or one player wins. A common rule in money play is "jacoby" which stipulates that gammons and backgammons only count as a single point if the cube has not been turned yet. In this style of backgammon, the contestants agree on $$/point. So lets say you agree to $5 / point, if you win a doubled gammon (4 pts) your opponent owes you $20

In a match, the players agree on what the match length is and the first player to reach that score wins. If you are playing for money, lets say $5 then that's the most you can lose in the match regardless of what the cube and final score is. Match play is the common format used in tournaments where each player contributes to the prize and the winners walk off with a big payoff.

Currently only match style games are offered on GreedyGammon.

One of the things i had a hard time understanding when I started playing bg the bear-off rules.
For some reason I just could not figure it out but it really is very simple.
If you have trouble getting it, I would suggest to get gnubg and set up the board (edit) to a bearoff position and practice with the "hint" setting to see what moves are allowed. Here are some examples 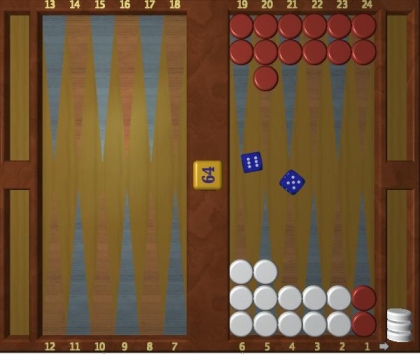 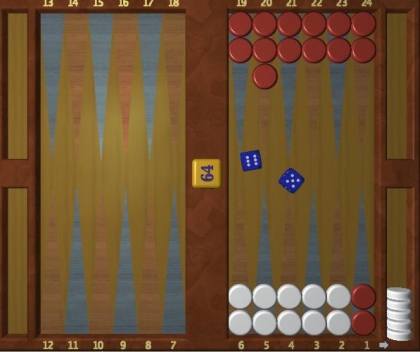 Now if you roll 6-5 again you must take off 1 from the 6 pt and another from the 5 pt such that you leave 2 blots. There is no way around it. It is a forced move. 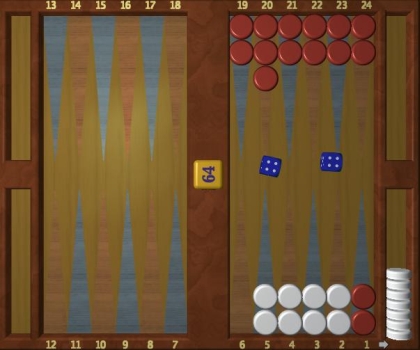 In the position above, if you roll 6-4 or 5-4 you are forced to leave 2 blots. They are essentially the same roll since you dont have a checker on yur 6 pt you must move the next available checker with the 6. If you roll 6-3 or 5-3 you can take one off and move the blot to your 2 pt. If you roll small numbers like 1-1 2-1 3-1 you are not forced to take any off, you can play those within your board stacking up safely without leaving any blots

In a match format, there is the 'crawford rule" this rule stipulates that when a player reaches 1 pt away from winning the match, the cube is disabled for one game. This game is called the crawford game and there is no cube doubling allowed. Once the crawford game is over, doubling can resume. So for example in a 5 pt match, your opponent wins a doubled gammon and the score is now 4-0. Since the opponent is 1 away from winning the match, you would like to double immediately so that if you do happen to win the next game you get double the points. The extra points on the cube dont help your opponent since he only needs one point to win the match. This is an unfair advantage to the trailing player so the "crawford rule" was established to balance this situation. If you win a gammon or backgammon in the crawford game you still get your 2 or 3 points just not doubled.

Go here for more tips for beginners viewtopic.php?f=18&t=153
DOWNLOAD GREEDYGAMMON
No registration required!
Install and play backgammon against the computer!
Detailed how to installation guide with screenshots
Post Reply
4 posts • Page 1 of 1