crunch his board Your board has crunched when you are forced to move your checkers off the high points of your home board, into the 1-2-3 points. This means that you can no longer trap your opponent on the bar as the exits on the high points are open.

make a point Make a point by placing 2 or more checkers on that point. Ex. With opening roll of 3-1, you make your 5 pt.

slot To put a single checker onto a point in a bid to make that point, if the checker is not hit.

keep the 5 prime A "prime" in backgammon is a row of consecutively controlled points with 2 or more checkers on each point . You "build" a prime when you retain and extend the structure and you eventually "break" the prime when you start to bear off.

joker super joker A 'joker' in backgammon is a lucky roll.

control the outfield Leaving a checker back such that if your opponent tries to make a run for freedom, you have a checker that can hit and send them back.

give up the anchor An anchor is a single point you control with 2 or more of your checkers on your opponent side of the board. It is a safe zone if you get hit you have somewhere to land off the bar and you reduce your risk of getting closed out and gammoned. Eventually, voluntary or forced, you will have to break anchor and head home. Deciding when to break anchor and head for home takes experience. If you stay back too long you lose your racing advantage, but if you break too early, you risk getting hit and possibly gammoned. The match score must be taken into consideration, as well as your opponent position strength.

x pips behind A "pip count" is a number that denotes the state of the race. Each player starts the game with a pip count of 167. That is the number of spaces you must move to get all your checkers off the board. As the game progresses, the pip count changes. Checkers get hit, get trapped, opponent rolls big doubles etc. So you must keep track of your and your opp pip count, so you know how close the race is and whether or not you can take or offer a cube depending on how far ahead or behind you are in the race

dupes the 5 (short for duplicates) A number is said to be "duplicated" when your opponent must pick one of 2 moves, thereby reducing your chances of getting hit. So for example, if your opponent needs a 6 to escape your 5 prime, and you leave a blot 6 pips away, 6 is "duplicated". Opponent has to pick between escaping or hitting. Of course if the opp gets lucky and rolls 66, you get crushed, but its a low chance. 66 only happens 1/36 rolls.

it's a take for money In backgammon, there are 2 types of games. A "money" game and a ""match" A money game is a single game. When it is over, a new game is started. A match game continues until a player reaches the match score. Why "money" game.. well it is often the style of game played when playing for money. It is faster paced and more money is exchanged fast. In a money game, there is no match score considerations , so whether a position is a take or drop for the cube changes between a money and match depending on the match score. So when a player says" "this would be a take for money, but at this score.. I don't know" it means the score of the match taken into consideration is a concern.

holding game A holding game is a game where the players have both acquired advanced anchors, and are holding on to their position until one player is forced to break anchor.
DOWNLOAD GREEDYGAMMON
No registration required!
Install and play backgammon against the computer!
Detailed how to installation guide with screenshots

For clarification, the game above is not played on GreedyGammon. It appears to be GamesGrid interface.

GreedyGammon is much easier on the eyes if I may say so myself.. 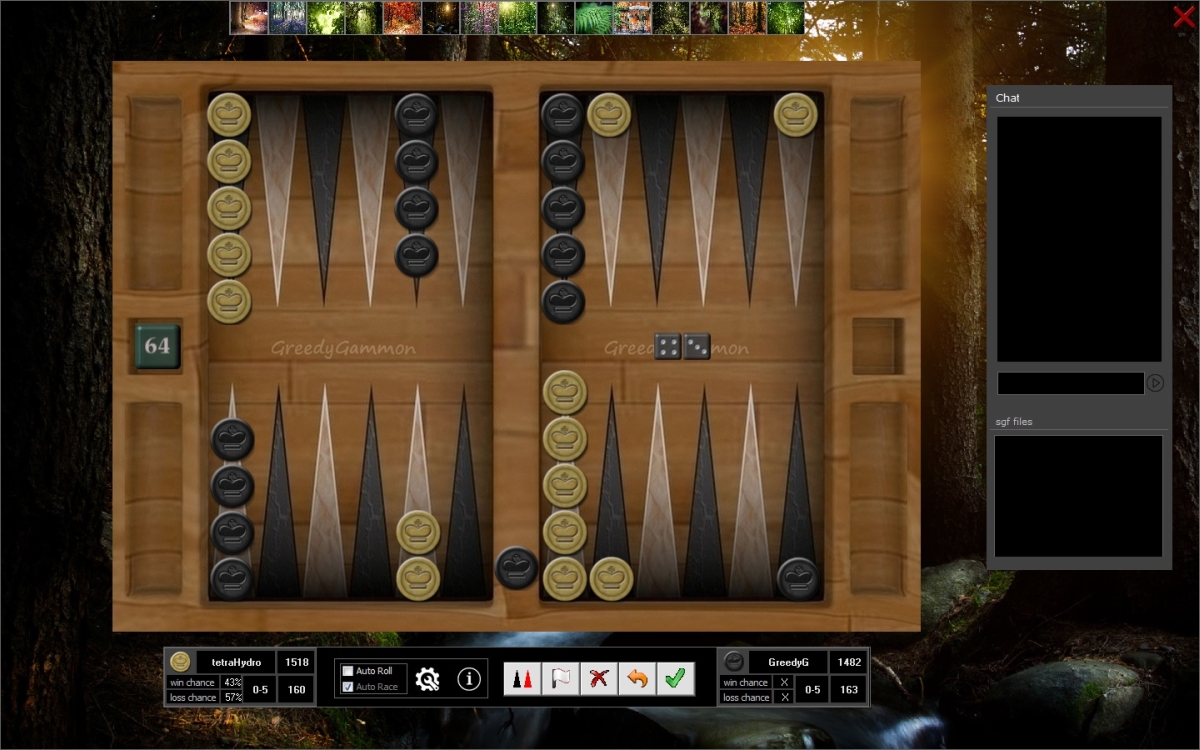 The image above is a screenshot from a
HP 22uh monitor (~$100)
1920x1080 resolution
Color setting on 6500k (default of 5000k was bad over yellow color. Took forever to figure it out and change after tweaking so many other setting) 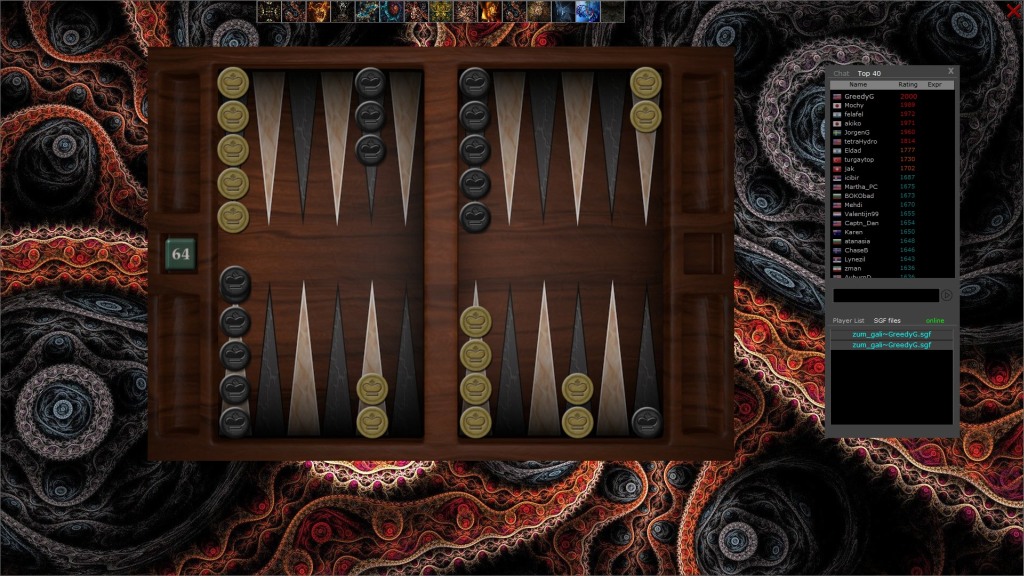 Dark Chocolate Theme
Select it from Preferences>boards
DOWNLOAD GREEDYGAMMON
No registration required!
Install and play backgammon against the computer!
Detailed how to installation guide with screenshots
Post Reply
3 posts • Page 1 of 1